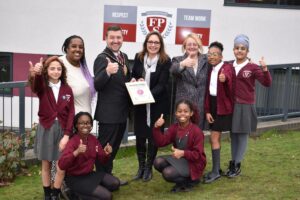 Ferndale Primary School based, in Great Barr, was among 10 schools to be awarded Gold Equality Award.
The award scheme provides support and guidance for schools to promote diversity and showcase commitment to equality, foster good community relations, terrorism prevention and fosters spiritual moral, social and cultural needs.
Deputy Mayor of Sandwell Councillor Richard Jones the borough’s education chief Councillor Karen Simms called into the Ferndale Avenues school to join in the celebrations.
Councillor Jones said: “It’s a real testament to the students and staff at Ferndale that not only are they only one of ten schools nationwide that earned this award but that they did so in less than half the time of most is exceptional. I congratulate them all.”
Ferndale’s head head Ruth Gillett said: “This award shows how the importance the school and our students place on being a fair and safe place to learn and develop without fear of discrimination and with opportunity for all regardless of gender or of cultural, national or religious background.”
Schools taking part aspire to attain bronze, silver and gold awards to allow schools to work at an achievable level and build on a commitment to equality over time. There are opportunities to progress through the levels as programmes develop.

Paul Shaw, who coached the team for the Tokyo Paralympics, spoke about his disability, being adopted and how he overcame his setbacks to achieve his goals.
Sandwell Council cabinet member for children and education councillor Karen Simms was also present during the visit which formed part of the school’s Diversity, Inclusion and Aspiration drive.
Headteacher Ruth Gillett said: “The school has 585 pupils, aged from three to eleven-years-old, and some 360 listened to Paul talk about how he overcame difficulties.
“As a result we have devised a whole programme through which we invite people from various fields, such as an historian, a scientist, sports people, musicians and artists to come into the school to talk to the children.
“Paul talked to the children about his life, his car accident when he was 20-years-old which led to him being in a wheelchair, and how he took up wheelchair rugby.

“He explained how this had led him to coaching the gold-medal winning disability rugby team and his achievements.

“Paul told the children that no matter what happens in life people can still achieve their dreams.
“We have children in school with special needs and Paul’s talk was well-received.
“The children absolutely loved it and were delighted to hear how he transformed his life to being what he has become today.”
Future speakers include Chloe Morgan, a goalie with Crystal Palace Women’s team. 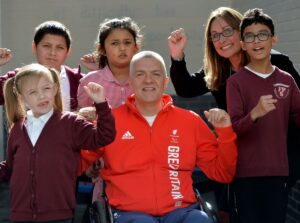 Paper copies of the information on the school’s website can be obtained by contacting us using the above details.